Recognizing the 50th Anniversary of the Voting Rights Act

Fifty years ago today, President Lyndon B. Johnson signed the Voting Rights Act (VRA) of 1965 into law. This historic piece of legislation promised to dismantle the legal barriers that prevented African Americans and other minorities from exercising their right to vote under the U.S. Constitution. By prohibiting racial discrimination in voting practices on every level of government, the Civil Rights Movement achieved one of its primary objectives–all Americans have the right to vote at the ballot box no matter their background.

Herald as the most effective civil rights law ever enacted, the VRA enabled the enfranchisement of millions of Black and other minority voters, and diversified the electorate and legislative bodies throughout the United States. At the time of the VRA's passage in 1965, there were six Black members of the U.S. House of Representatives and no Blacks serving in the U.S. Senate. By 1971, there were 13 Black members of the House and one Black member of the Senate. All of these newly elected Black Members of Congress were living manifestations of the VRA and demonstrated the power in voting.

In 2013, on the same week the Supreme Court made progress by striking down Proposition 8 and declaring key provisions of the so-called "Defense of Marriage Act" unconstitutional, the Court simultaneously gutted key sections of the VRA. As a result of this decision, today in many states across the nation, Americans are being targeted by racial discrimination and struggling to exercise their right to vote because of the enactment of voter suppression laws. These laws disproportionately impact poor people, people of color, people with disabilities, people with prior felony convictions, people who are homeless, and people who lack a photo ID that meets specific requirements. As these suppression tactics continue to spread, the right to vote is once again under attack in our nation.

On June 24, 2015, the Voting Rights Advancement Act (Advancement Act) (S. 1659/H.R. 2867) was introduced in Congress. The Advancement Act responds to the unique, modern-day challenges of voting discrimination that has evolved in the 50 years since the VRA first passed. The legislation recognizes that changing demographics require tools that protect voters nationwide–especially voters of color, voters who rely on languages other than English, and voters with disabilities. It also requires that jurisdictions make voting changes public and transparent.

Today, as the nation commemorates 50 years of the VRA, the National Black Justice Coalition (NBJC), the nation's leading civil rights organization dedicated to the empowerment of Black lesbian, gay, bisexual and transgender (LGBT) people, joins with the larger civil rights community and all people of goodwill to demand Congress #RestoreTheVRA. Pass the Advancement Act NOW!!! 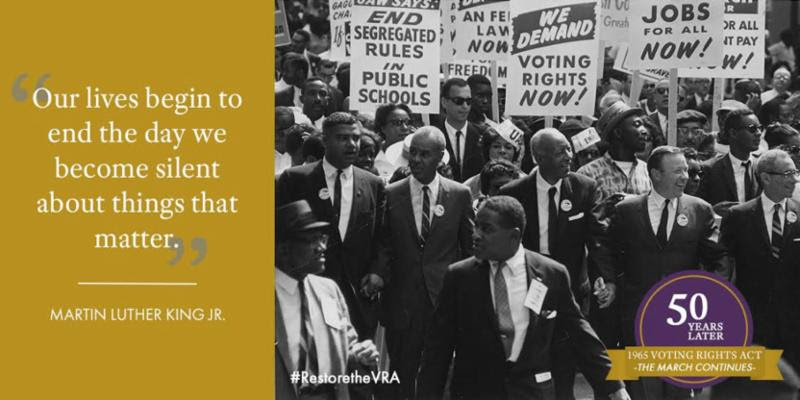 Join NBJC today and tell Congress it must act to protect the right to vote by passing the Voting Rights Advancement Act, restoring key provisions to the VRA, and protecting the rights and voice of all Americans.

Contact your Members of Congress HERE and demand that they CO-SPONSOR the Advancement Act (S. 1659/H.R. 2867) on this 50th Anniversary of the Voting Rights Act!