Washington, DC – The National Black Justice Coalition (NBJC) released the following statement in response to the repulsive and inexcusable remarks made this week by the 45th President of the United States concerning the acts of violence and terrorism by white supremacists this past weekend in Charlottesville, Virginia:

The horrific acts of domestic terror and hate in Charlottesville over the weekend have left us at the National Black Justice Coalition with a myriad of feelings, including anger, hurt, exhaustion and a sense of hopelessness for our communities. We are not shocked nor surprised by the events of Charlottesville that ultimately left three people dead and more than 30 people injured in the streets. These episodes of homegrown terrorism rooted in white supremacy are nothing new, but a part of a long and polarizing history of violence perpetrated on Black people and other communities of color for centuries now.

However, this particular series of hate violence is different due to the fact the current occupant of the nation's highest office has willfully and with no remorse placed hate-fueled groups like white nationalists and neo-Nazis on the same moral footing as counter-protesters standing up against hate in Charlottesville. Earlier this week, the nation and the world watched an indignant and small-minded leader once again declare that there was equal blame on "both sides" of the violence that erupted in Charlottesville. He further stated that there were "very fine people" there "innocently protesting" the removal of Confederate statues. This unequivocal support and endorsement of the worst in our nation by this president was affirmed by the Ku Klux Klan leader, David Duke, in the following tweet.

Supporting or affirming white nationalists, white supremacists, neo-Nazis and now this president's authentic position on Charlottesville is downright dangerous and threatens the very essence of who we are as a people. The rise of white supremacist terrorism in recent years comes as a result of generations of covert organizing by these reprehensible extremes in American society. Since the end of the Civil War and the establishment of the Ku Klux Klan during the Reconstruction era, white supremacists have been at work trying to perpetuate terror on Black people and other marginalized communities to stop their ability to thrive. These racist tactics have even manifested in our political system in the modern era with the roll-out of the 'Southern Strategy'  after World War II and throughout the Civil Rights Movement. During these tumultuous years, many Southern white democrats left their party as a result of the Democratic Party's support for civil rights for Black people. As such, we continue to see this sentiment reflected in current policy proposals in state legislatures controlled by the Republican Party like the continued attack on voting rights and the all out assault on peaceful protests. During this year alone, a growing number of states have introduced bills with the goal of limiting the ability to exercise our First Amendment right to organize and protest the government. The most alarming of these types of legislation have been introduced by six states and would actually protect people who drive into protesters. This is dangerous public policy that actually works in concert with the hate we saw this past weekend. As people of good will, we cannot deny this truth or reality for our nation.

In the aftermath of the attacks at the very heart of our nation in Charlottesville, we must be resolute with what we are dealing with. White supremacy and the forces that feed this monster in our nation is an immediate sickness that will continue to plague our nation. The people taking up this cause have declared at all costs to kill, destroy and/or separate the people of this nation. The only way to move forward is to call these forces by name and ensure that this long history of terrorism continues to be associated with any movement of hate, including the new-coined term 'alt-right.' Then, our communities and all freedom loving people must demand that our government, elected officials, corporate entities and all mainstream institutions reconcile their policies and actions to eradicate this evil. This means that we must hold accountable those in current leadership and remove those in power that actually share the sentiments of this movement. There is no room for placating coded language and making room for racism in modern America. Until we move in this fashion, unapologetically, we will continue to see more events like Charlottesville. 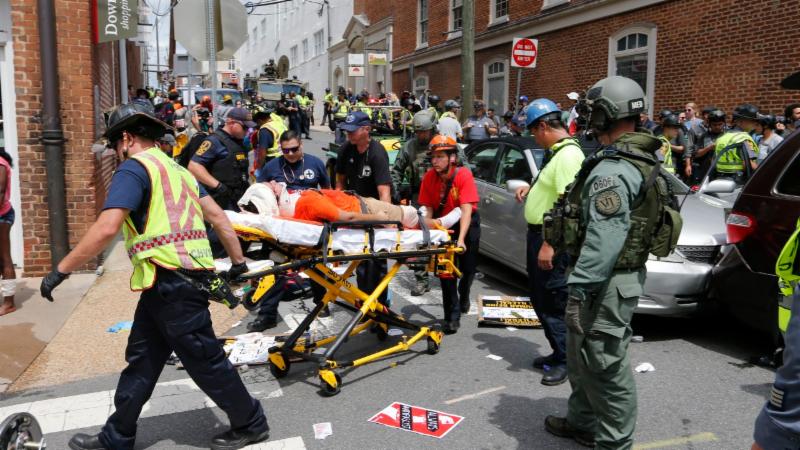 At NBJC, our mission remains the same. We will continue to educate our communities and advocate for public policies at every level of government that empower and protect our families and communities. We must work in coalition with other diverse constituencies and hold the U.S. Department of Justice accountable to do a thorough review of this and other white supremacist acts of terror in our nation. We must also ensure that our lawmakers in Congress are checking the Trump Administration as both the rhetoric and policies of their leadership is testing the moral fabric of our nation. For we cannot heal until we admit this issue is rooted in racism, bigotry and hate, and many of our current political debates encompass an undercurrent that inflames this evil.

We cannot heal or achieve justice in our nation without accountability. Do we as a nation have the courage to demand and work, collectively and relentlessly, to see that justice is served? This is the question that we wrestle with now and must not let anyone, including the President of the United States of America, or forces of white supremacy and white nationalism take our eyes off that sacred objective.