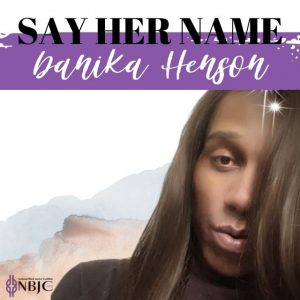 In the days following Danika Henson’s death, friends, family, and members of the Baltimore Safe House hosted a candlelight vigil and balloon release in her honor. She is lovingly remembered as a good and sweet person with a big heart.

“The violence against trans people, especially Black trans women, seems never-ending,” said Victoria Kirby York, Deputy Executive Director of the National Black Justice Coalition. “Our community is constantly in a cycle of mourning and seeking accountability, often without reprieve or anything that comes close. The lack of proactivity from elected officials and law enforcement at the national, state, and local levels is deeply concerning. We stand in solidarity with Danika’s family as they mourn her loss and will continue to sound the alarm on what is rapidly becoming the deadliest year on record for trans people in the United States.  We also stand in solidarity with the loved ones of Sophie Vasquez and Whispering Wind Bear Spirit”

The Baltimore Police Department is investigating Danika Henson’s death.  They ask anyone with information to contact detectives at 410-396-2100 or Metro Crime Stoppers at 866-7Lockup.