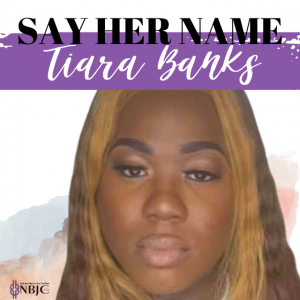 “Black trans women deserve to live without the fear their life will be cut short because of violence. They, like everyone else, deserve a chance to thrive, to find joy and purpose,” said Victoria Kirby York, NBJC Deputy Executive Director. “The stigma and violence against the trans community must end. We all must demand action from local, state and federal law enforcement and lawmakers. Inclusion of transgender, intersex, and nonbinary people at the intersections of other marginalized identities within national and local crime data sets along with prohibition of deadnaming, misgendering, and using pictures not reflective of how they presented in life, are crucial to effectively investigating transgender deaths. Policies must be passed that will work to protect the trans community from the violence and discrimination they currently face.”

Anyone with information on the death of Tiara Banks can submit an anonymous tip here: https://new.tipsubmit.com/en/create-report/anonymous/ChicagoPD. If you wish to support Banks’ family with funeral expenses please contact Higgins Family Funeral Home at (773)-366-3663.

To learn how to reduce gender-based violence, look here and here.

To learn more about changing your local laws to increase protections for trans and non-binary community members, look here.

The NBJC Stolen Lives list of trans and non-binary siblings lost to violence and hate can be found here.