What Happened to Mikayla Miller? 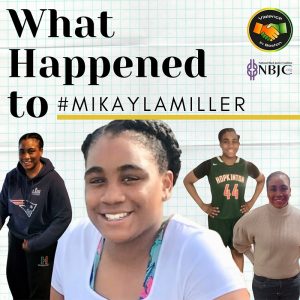 We at the National Black Justice Coalition (NBJC) are reaching out to ask if you will help us raise awareness for Mikayla Miller. Mikayla Miller was a 16-year-old Black LGBTQ+ girl who was found dead on April 18, 2021, in Hopkinton, Massachusetts, only a day after she had been assaulted by 5 white teens (two of them young men). The state medical examiner has ruled her death a suicide but Mikayla’s mother, Calvina Strothers, along with activists and organizations, including NBJC and Ending Violence in Boston, believe that Mikayla was murdered.

Here are five things we know about the case that don’t add up, highlight the need for accountability including for the fact that Mikayla was assaulted less than 24 hours before she was found dead, and that lead us to believe this was not a suicide:

We are still fighting to figure out what happened to Mikayla and we would like for you to join us in raising awareness by sharing information about the case and asking for accountability for Mikayla Miller. Linked HERE is a folder with digital assets that can be shared across digital platforms.