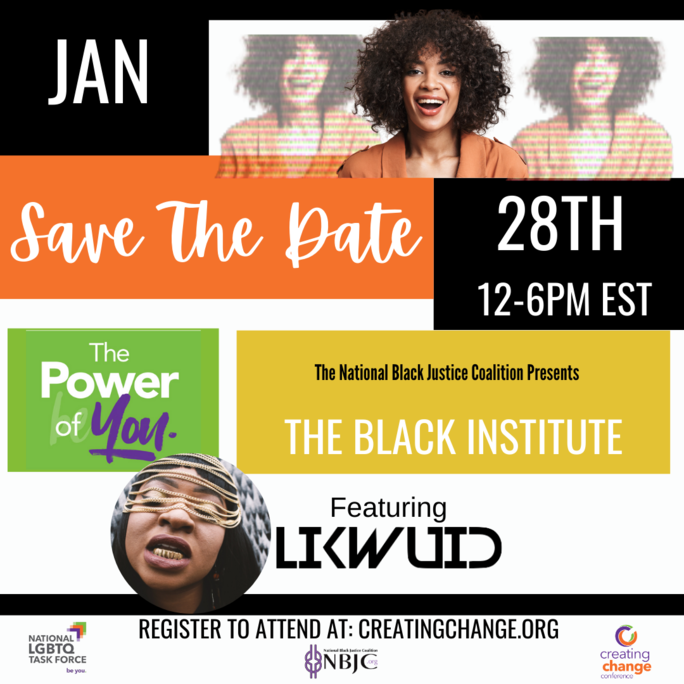 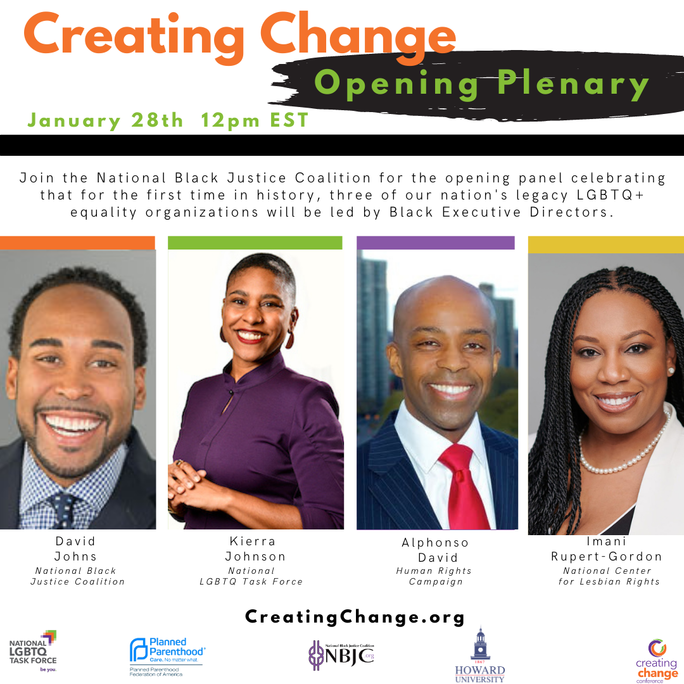 WASHINGTON, DC — The National Black Justice Coalition (NBJC) is excited to kick off its 8th annual Black Institute by co-producing the headlining and opening plenary panel for the largest convening of LGBTQ+ advocates in the country known as Creating Change.

The National Black Justice Coalition recognizes that for the first time in history, three of the national Stonewall era LGBTQ+ equality organizations; National LGBTQ Task Force, Human Rights Campaign, and National Center for Lesbian Rights, are led by Black Executive Directors. A milestone made only more significant by the fact that each of them are serving during the same time period. As the singular national Black civil rights organization working to end racism while championing LGBTQ+/SGL equality, we will honor this historic moment by leading and moderating the Creating Change and Black Institute Opening Plenary Panel featuring these trailblazers. The panel will discuss the significance of this moment in the movement for radically inclusive social justice that furthers policy and community change demonstrating that all Black Lives Matter as they lead organizations that will continue to be responsible for addressing the diverse needs of the LGBTQ+ community.

The opening plenary will be moderated by the National Black Justice Coalition’s Executive Director, David J. Johns, and will feature the following speakers:

The 8th annual Black Institute will take place on Thursday, January 28, 2021, from 12 pm to 6 pm EST. The Black Institute is a part of the National LGBTQ Task Force’s 33rd annual Creating Change Conference, the largest LGBTQ+ activist conference that brings together leaders from across the nation to strengthen their commitment to freedom, justice, and equity for all LGBTQ+ people. This year’s theme, “New Ideas for a New Era of Opportunity,” reflects opportunities to advance inclusive social, economic, and political changes presented by a new presidential administration and a host of new, diverse political leaders and elected officials working on behalf of diverse American communities to strengthen democracy and strengthen our country.

“Too often, the legislative process, and the social influences that inform the legislative process, does not consider those with intersectional marginalized identities. The annual Black Institute provides opportunities for activists to connect their lived experience to advocacy opportunities, work that is critically important to advancing policies that address the often unmet needs of Black LGBTQ+/SGL people, families, and communities,” said NBJC Executive Director David J. Johns. It’s also noteworthy and worth celebrating the significant shift in representational leadlership not only among those of us leading progressive and civil rights organizations but also among elected officials at every level of government. What’s most exciting is that the best has yet to come.

NBJC is the nation’s only civil rights organization focused on the intersection of lesbian, gay, bisexual, transgender, queer, and same gender loving (LGBTQ+/SGL) rights and racial equality. With racial inequity as a significant priority for the Biden/Harris administration and a continuing patchwork of civil rights laws across our country, the organizations’ leadership comes at an opportune time.

In addition to the plenary and attendee driven policy solution breakout groups, NBJC will also release the 2021 Policy Agenda at the Black Institute. The policy pillars include: Ensuring that All Black Lives Matter, Co-Creating a Nation Where We All Can Thrive, and Repairing and Healing a Divided Nation. Issues impacting Black LGBTQ+/SGL communities that will be discussed as a part of these pillars during the Black Institute include criminal justice and health care reform, the violence currently facing Black transgender and nonbinary communities, economic and educational inequality, and civil rights inclusion and expansion.

Planned Parenthood Federation of America (PPFA) and Howard University’s Department of Political Science are official partners in this year’s events.