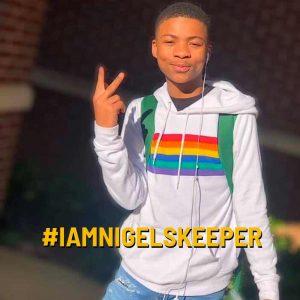 Today, February 1, is Nigel Shelby’s 17th birthday. Nigel was only 15-years-old when, on April 18, 2019, he died by suicide. Nigel’s death was a response to the unrelenting homophobic bullying he faced at school. Nigel’s mother, Camika Shelby, described her son as a sweet boy with a heart of gold who was respectful, well-mannered and full of joy and light. Nigel was an aspiring performer and Camika said that he still had so much love to give. The loss of Nigel will always be heartbreaking–he should be here pursuing joy.  NBJC hopes that Nigel’s life and legacy reminds us that there is work to do to ensure that all of our children, youth, and young adults feel affirmed and valued for all of the important parts that make them who they are.

I still find that so many people mistakenly believe that suicide specifically, or mental health challenges are exclusively white experiences. The fact remains that every year children, Black children, like Nigel, die by suicide and we don’t even talk about it.

“The fact that the suicide rates among Black children have doubled in the last two decades while the rates for all other groups of children based on race and ethnicity have fallen should alarm anyone who purports to care about our children.

“Beyond that sad fact, we have had years of reports about the experiences of students who are or who are perceived to be lesbian, gay, bisexual, transgender, queer or questioning + in schools and in the streets that they are often pushed to when their families and communities are not safe and affirming places for them to learn and grow. It’s beyond time for all of us to honor Nigel’s life and legacy by doing more to hold space for acknowledging and then addressing the mental health needs of Black children, youth, and young adults.”

The issue of suicide in Black lesbian, gay, bisexual, transgender, queer and same gender loving  (LGBTQ+/SGL) youth and young adults is one that does not get the attention the health crisis deserves. According to Ring the Alarm: The Crisis of Black Youth Suicide in America, Black youth under 13 twice as likely to die by suicide compared to their non-Black counterparts. A study by the Center for Disease Control and Prevention found that suicide attempts rose for Black adolescence by 73% between 1991-2017. According to GLSEN, 74% of LGBTQ+/SGL students have reported feeling unsafe, bullied and harassed in schools across the United States.

Eliminating the stigma that prevents Black people from celebrating the diversity that has always existed within Black communities, a stigma that can lead to Black LGBTQ+/SGL people feeling isolated and unaccepted within their own communities is critically important. We applaud parents like Camika Shelby, who, inspired by her son, works with the National Black Justice Coalition to help disrupt the stigma and to raise awareness about the unmet mental health needs that Black LGBTQ+/SGL students often face.

I also want to ensure that young people who show up in the world as Nigel did know the following three things:

Did you know that there’s an organization called the National Black Justice Coalition that is focused explicitly on the civil rights of Black TQBLG+ and same gender loving people? You can find resources and inspiration there. Check out @nbjconthemove.

Finally, if you need it, reach out for help.  Sometimes a trusted friend or community member is enough – someone to affirm me or just listen. It’s appropriate to get crisis support. There’s the crisis text line at 741-741. If you text STEVE they will connect you to a counselor with some cultural competency training. The Black Emotional and Mental Health Collective has resources that include mobile crisis response.  Below is a list of 24 hour hotlines you can reach out to:

We must do more to protect and help Black youth, especially Black LGBTQ+/SGL youth, who are struggling with bullying and mental health issues. Children deserve to feel supported, loved and validated in their identities and should never feel like they have to go through their struggles alone. Together we can work to end this crisis and bring down the rates of Black youth suicide.