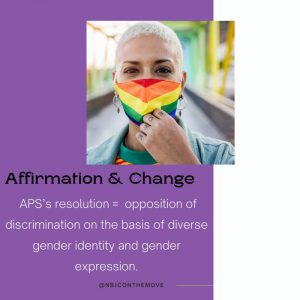 The APA also adopted new guidelines on the importance of considering intersecting identities, such as being Black and gay, or being an older bisexual person.

In reaction to the announcement, David J. Johns, Executive Director of the National Black Justice Coalition (NBJC), a leading civil rights organization dedicated to the empowerment of Black LGBTQ+/SGL people, including people living with HIV/AIDS, issued the following statement:

“We applaud the critically important resolution on Gender Identity and Change Efforts made by the American Psychological Association. The clear acknowledgement that diverse expressions of gender identity and gender expression—which are distinct from, and too often conflated with, the sex that a doctor assigns at birth—are not mental disorders, affirms and will save lives.

“The resolution makes clear how the “master narratives” described by Critical Race Theorists are “informed by, and parallel, the larger Western and United States-based medical-model narratives that (1) define gender as binary and conflate it with physical markers, (2) define masculinity, and characteristics historically attributed to men/boys, as superior to feminine and characteristics attributed to women/girls, (3) create systems that confer privilege to cisgender people and label cisgender identities and expressions as normative, [and] (4) discriminate against transgender and gender nonbinary individuals (Stryker, 2017) should be at the center of every conversation about filling foundational gaps in ensuring that every American is treated fairly and has the opportunity to live with dignity regardless of how they identity, love, or show up in the world.”

“We are thrilled that the world is becoming a safer place for young people whose gender identities and/or gender expressions haven’t fit into outdated ideas about ‘normalcy.’ We also know that there’s more work to do. All of us carry biases of some kind or another and all of us can overcome them with some effort.”