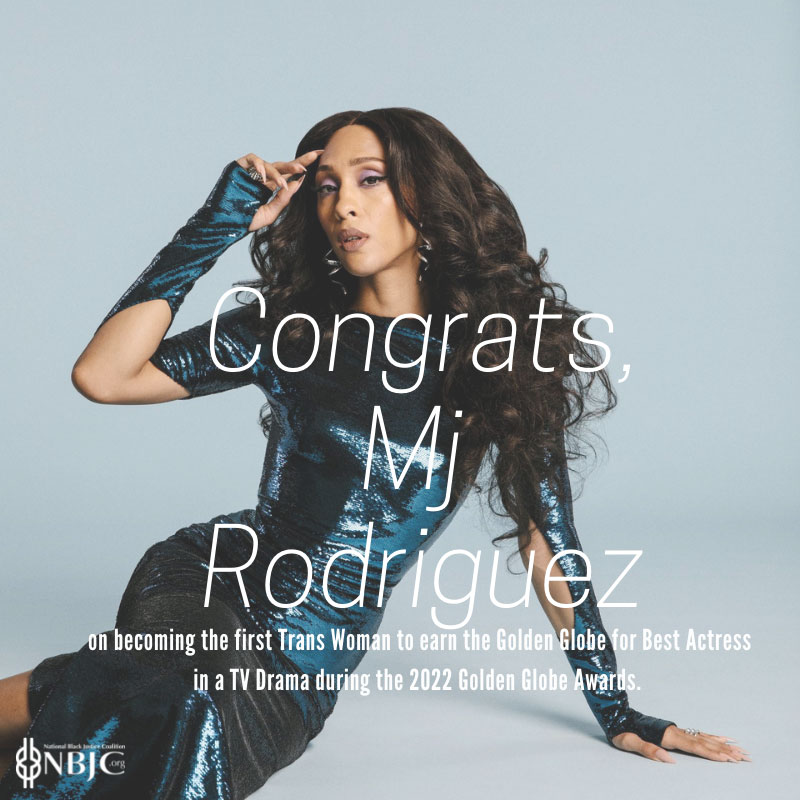 The National Black Justice Coalition (NBJC) congratulates Michaela Jae “Mj” Rodriguez on earning the Golden Globe for Best Actress in a TV Drama during the 2022 Golden Globe Awards. Rodriguez won for her role as Blanca on the FX show “Pose.” She made history as the first openly transgender actor to win a Golden Globe.

Last year Rodriguez also made history when she became the first openly transgender person nominated for a lead acting Emmy.

On Instagram, Rodriquez celebrated her Golden Globes win, saying, “this win is going to open the door for many more young talented individuals” and “to my young LGBTQIA babies, WE ARE HERE the door is now open, now reach for the stars!!!”

“I am thrilled to see the incredibly talented Mj Rodriguez recognized for her talent and groundbreaking leadership,” said David Johns, NBJC Executive Director. “Pose has offered essential representation for the Black lesbian, gay, bisexual, transgender, queer+, and same-gender loving (LGBTQ+/SGL) community, with Mj playing a leading role in helping to curate positive, affirming, and diverse stories about our communities.  It is powerful to see a show that celebrates us and our history continue to receive acclaim.  I hope this continues to serve as a testament to the fact that we have always been here and will continue to show up and show out. As Mj said, this visibility shows our babies that we are here, we are thriving, and anything is possible for us. Let us continue to lead on behalf of our babies.”

“Pose” ended in 2021 after three seasons. Since its premiere, the show has received several Golden Globe nominations, but Mj Rodriguez was the first winner for “Pose.”