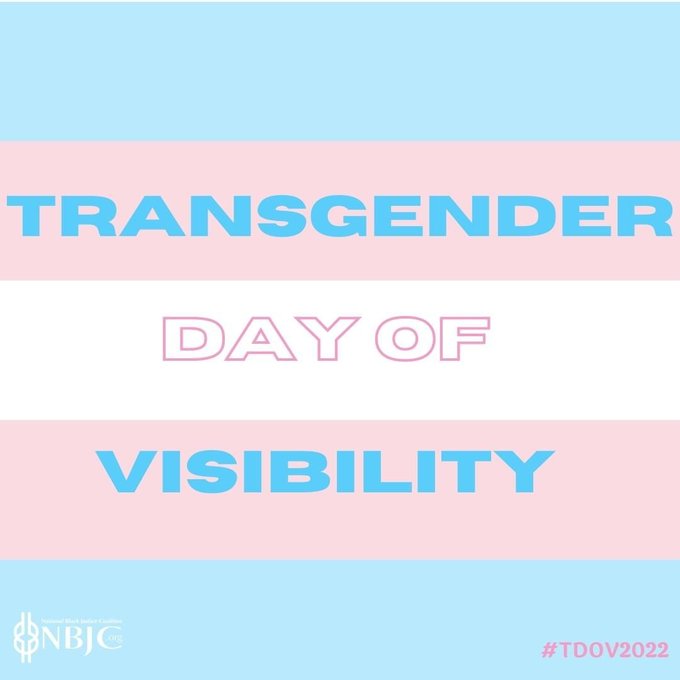 “The International Transgender Day of Visibility honors the lives of transgender and non-binary people across the world. While we too often hear of lives stolen by violence, today is a day to lift up the incredible and powerful ways that transgender people are thriving in fields of their choice within and outside of gender and sex-based stereotypes.

“This day is critical for transgender and non-binary/non-conforming youth who need to see that they are not alone and that it is possible to thrive. Transgender and non-binary/non-conforming people are doctors, lawyers, entertainers, elected officials, advocates, athletes, teachers, clergy, parents, and so much more. Seeing this breadth of representation can be life-affirming and life-saving.

“We are proud to highlight leaders serving on NBJC’s Black Transgender Advisory Council (Black TAC). Members are trailblazers who have re-created notions of what is possible for Black transgender people. Through their breadth of experience, the members of our Black TAC remind us that access to opportunity can facilitate self-actualization and equality.  We also celebrate our National Organizing Manager, Camden Hargrove, a Black transgender father and leader who works with grassroots leaders and activists across the country.

“This day also highlights the need for action. We urge the Biden Administration and U.S. Senate to act immediately by passing the Equality Act and implementing other protections for the trans and non-binary community. International Trans Day of Visibility is an opportunity for lawmakers to conceptualize and draft policies that protect the trans community while also considering laws that must be repealed or rejected.

“Right now, more transgender people are focused on their everyday safety and survival. This is unacceptable. We will continue this fight today and every day to ensure that all trans people can thrive.”

The National Black Justice Coalition is amplifying voices from the Black Trans Advisory Counsel (Black TAC). They advocate for and on behalf of the trans community within the realms of human rights, medicine, criminal justice, and more.

Call the United States Capitol switchboard at 202-224-3121 to get connected directly with your Senator to encourage them to support the trans community on this day and every day and ensure they pass legislation that protects the community.