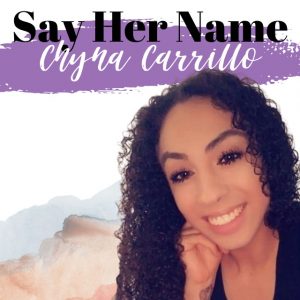 Chyna Carrillo is the Eighth Known Transgender Person Murdered in 2021

New Wilmington, Pennsylvania — The National Black Justice Coalition (NBJC) mourns the death of Chyna Carrillo, a Latinx transgender woman and frontline nursing home worker. On Thursday, February 18, police found Carrillo being attacked by Juan Carter Hernanadez at a house in New Wilmington, Pennsylvania. Police report that when Hernandez, who was previously convicted of murdering his wife, refused to stop his car, they shot and killed him. Carrillo was taken to St. Elizabeth Health Center, where she died from her injuries. She would have turned 25 on March 3rd.

“Chyna Carrillo was supposed to be embarking on new adventures in Pennsylvania,” said Dr. Kia Darling-Hammond, director of education programs and research at NBJC. “She was 24, full of life, and full of promise. Her friends say she had a contagious smile. It is devastating that a move that should have been a beginning in life put her in the path of that man’s rage and destruction. It’s a sign of our failure as a society. Chyna should be alive.”

Carrillo was a certified nursing home assistant who worked at a residential living facility. She had recently moved to New Wilmington from Arkansas.  Carrillo was described as being outspoken and confident. People around Carrillo said that she would make their world light up. Chyna’s aunt, Mayra Carrillo, called her a “beautiful mermaid.” SisTers PGH, a trans-led nonprofit that serves transgender and nonbinary people in Southwest Pennsylvania, along with forty community members and college students held a candlelight vigil on Sunday, February 21st for Carillo.

Carrillo’s has become the eighth known violent death of a transgender person in 2021. She is the second Latinx trans person and first trans Latina killed in 2021. According to the National Black Justice Coalition, 2021 is on track to be the deadliest year for transgender people in the United States, with four times as many trans people murdered this year than in 2020.

“Chyna’s murder marks the grim milestone of four times the number of deaths we saw this time last year, a stark reminder of the misogyny and transphobia prevalent in American society and how urgent our work is. While 2020 was the deadliest year for trans, nonbinary, and gender nonconforming people on record, not only is the record likely incomplete, but 2021 has already begun to outstrip it. It is time to take a stand, both locally and federally, to protect our trans, nonbinary, and gender nonconforming communities,” added Dr. Darling-Hammond

To learn how to reduce gender based violence, look here and here.

To learn more about changing your local laws to increase protections for trans and nonbinary communitymembers, look here.