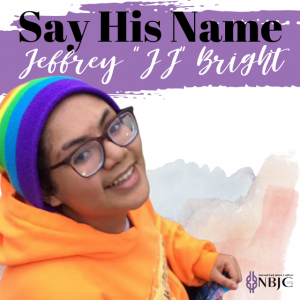 PITTSBURG, PA — The National Black Justice Coalition (NBJC) mourns the death of Jeffrey “JJ” Bright, a 16-year-old transgender teen. Jeffrey and his 22-year-old sister, Jasmine, who were shot on February 22, 2021, in Ambridge, Pennsylvania. At this time, their mother is in custody for the killings.

Both siblings participated in programs run by P.R.I.S.M. (Pride. Respect. Inspiration. Safety. Mentoring.), a local non-profit outreach organization for LGBTQ+ youth in Beaver County, Pennsylvania. The group shared in a statement that “JJ was a beautiful person with the biggest and brightest smile. We will miss your laugh. We will miss your jokes. You will never be forgotten. Fly high, JJ.” The director of the organization said of the siblings that “They both were very talented, very artistic and just good kids. Really good kids.” PRISM held a candlelight vigil for JJ and Jasmine, where more than 100 people gathered to honor their lives.

“The deaths of Jeffrey JJ Bright and his sister Jasmine are profoundly tragic,” said Dr. Kia Darling-Hammond, director of education programs and research at the National Black Justice Coalition. “The murders of trans people in this country are a crisis – with an over 400% increase in killings since this time last year. Firearms make it worse – with reports indicating that there are on average 28 hate crimes in the U.S. involving a firearm each day. This is a national catastrophe and it requires urgent action.”

Bright has become the ninth known violent death of a transgender person in 2021. (Note – Natasha Keianna’s family believes she was murdered, though autopsy results are still pending.) He is also the first trans person under 20 years old to be killed this year, bringing the average age at death of transgender people murdered in 2021 to 28 years young.

At this time last year, only two murders of trans people had been documented in the United States – the killings of Dustin Parker in McAlester, Oklahoma and of Neulisa “Alexa” Luciano Ruiz in Toa Baja, Puerto Rico. Both victims were under 30 years of age.  In 2021, there have been 9 killings, with 3 deaths in February, two of which happened in Pennsylvania. All told, the number of deaths thus far is more than 400% higher than last year. Even though violent crime in the U.S. has declined over the past three years, according to the FBI, anti-LGBTQ+/SGL hate crimes are on the rise, as are racially motivated hate crimes. These are urgent problems.

Learn more about how to reduce gender-based violence here and here.