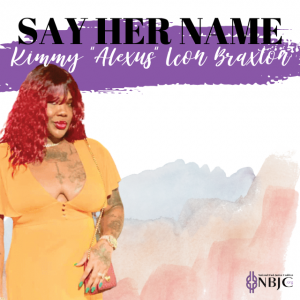 MIAMI, FLORIDA — The National Black Justice Coalition (NBJC) mourns the loss of Alexus “Kimmy Icon” Braxton. On February 4th, 2021, Alexus “Kimmy Icon” Braxton, a Black transgender woman, was found at the California Club Condominiums in Miami, Florida. Police are investigating her death as a homicide, with the possibility of pursuing hate crime charges. Braxton was just 45 years old. TransGriot Weekly corrected the police’s information flyer to increase the likelihood that accurate information could be gathered about her death, calling for #JusticeForAlexus.

Those who knew Braxton say she was “as real as they get.” Born and raised in Miami, she studied at Miami Dade College and had been working as a hairstylist at the time of her death.

“Alexus Braxton’s life was so much bigger than the stories now circulating about her death,” said Dr. Kia Darling-Hammond, director of education programs and research at National Black Justice Coalition (NBJC). “She loved, and was deeply loved by, her community, friends, and family. Her death has left a hole too large for her loved ones to describe. Nor should they have to. She should be alive.”

Braxton’s is the sixth known violent death of a trans person in 2021 and the seventh trans person found dead in 2021. She is the fifth Black trans woman killed this year, a trend reflecting the long-standing and compounded effects of anti-Blackness, transphobia, and misogyny (transmisogynoir).

“More of our trans siblings have been violently killed this year than in 2020 – which was already the most deadly year on record. This is a national crisis and we must take urgent action to address it,” added Dr. Darling-Hammond.

To learn how to reduce gender based violence, look here and here.

To learn more about changing your local laws to increase protections for trans and nonbinary communit members, look here.

The NBJC Stolen Lives list of trans and nonbinary siblings lost to violence and hate can be found here.