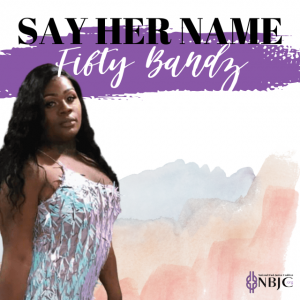 Fifty Bandz is the Fifth Transgender Person Murdered This Year

BATON ROUGE, LOUISIANA — The National Black Justice Coalition (NBJC) mourns the loss of Fifty Bandz. Fifty Bandz, a Black transgender woman, was fatally shot by her former partner, on January 28th, in Baton Rouge, Louisiana. She was 21 years old. On February 1st, friends celebrated her life with a balloon ceremony and a call for #JusticeForFifty.

Those who knew Fifty are posting on social media to reminisce about her kindness and generosity, some expressing outrage and sorrow about the local government’s failure to affirm and protect trans people, including Fifty.

“These deaths, these murders of our trans and nonbinary siblings, are senseless,” said Dr. Kia Darling-Hammond, director of education programs and research at NBJC. “Our living community walks under the shadow of constant threat, and those we’re losing are, largely, just beginning their precious lives. Fifty Bandz is the fifth victim of transphobic violence that we know of since the start of this new year. Four of those stolen from us were Black women and all five victims were age 30 or younger. This is an emergency.”

Fifty Bandz’ killer has since been apprehended. However, because both the media and police misgendered Fifty, an especially common occurrence for transgender people, the investigation into her murder was stalled.

“As we grapple with a racial reckoning and a global pandemic, we also face a relentless epidemic of transphobic violence and little to no protection for the community. We must all help bring this to an end,” added Dr. Darling-Hammond.