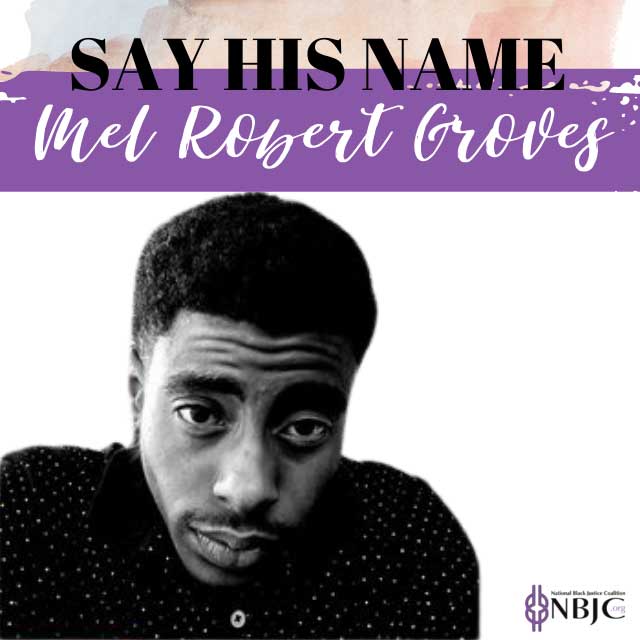 Group Warns 2021 is on Track to be the Deadliest Year on Record for Trans People in the U.S.

JACKSON, MS- The National Black Justice Coalition (NBJC) mourns the death of Mel Groves, a 25-year-old Black transgender man from Jackson, Mississippi. Groves was shot multiple times and drove himself to Merit Health Hospital, where he collapsed outside his vehicle. He was then taken to the University of Mississippi Medical Center, where he died on October 11, 2021. Groves was a farmer for The Knights and Orchids Society’s garden program and a plant-soil scientist who loved agriculture and animals.

Groves has been misgendered and deadnamed by news outlets covering his death, which is common in coverage of stolen trans, nonbinary, or gender-nonconforming lives.

“The violence this year seems never-ending, and I am devastated each time I hear of another trans sibling lost,” said Victoria Kirby York, Deputy Executive Director. “What is even more heartbreaking is the fact Mel expressed fear for his life because he was trans living in Jackson. Trans people should not have to fear violence simply because of their identity, but that is our country’s current reality. This has to do with the prevalence of transphobia and racism in our daily lives and the inaction around the epidemic of violence against the trans community and the broader Black community.

Mel Groves is one of 39 transgender, nonbinary, or gender-nonconforming persons to be killed in 2021. This year is on track to surpass 2020 for the deadliest year on record for violence against the trans community. For context, the transgender community is only 0.8% of the entire Black adult population in the U.S and 0.6% of the entire U.S. adult population, according to the UCLA School of Law’s Williams Institute.

“How many times do advocates have to demand legislation that protects the trans community before lawmakers introduce and pass laws that do so? How many times must we point out that misgendering and deadnaming in police reports and news coverage damages the investigations? How many times must we highlight the need for training and action from public safety officials addressing and preventing the violence against the trans community? We cannot continue the way we are going. The time for action is now before even more lives are lost,” added Kirby York.

Police are currently trying to determine a motive and potential suspects. The Knights and Orchids Society is offering a reward for any leads and information on the death of Mel Groves.