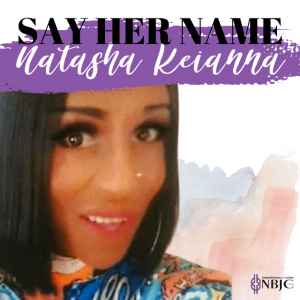 Natasha Keianna, a 37-year-old Black transgender woman, was found dead in her car on January 12th, 2021 about 2 miles from her home in Detroit, Michigan. Natasha was reported missing by her family on January 6th and last seen on December 26th, 2020. An autopsy has been requested by the family, despite police claims that there are no signs of trauma or foul play.

Natasha was in good mental and physical condition when her family last saw her. The motel that Natasha was seen leaving before she disappeared said that before she left, she made a payment and left all of her belongings in her room.

“It is distressing that Natasha Keianna’s family has had to order an autopsy to be sure of the cause of death in her case,” said Dr. Kia Darling-Hammond, director of education programs and research at the National Black Justice Coalition. “If the report proves foul play, Natasha will be one of four trans persons whose lives have been stolen in the just six short weeks of 2021. If not, Natasha’s death is still a reminder that our trans siblings are still living under disproportionately precarious conditions. In every case, we must urgently respond to protect trans and nonbinary community members.”

“The pace of violence in 2021 is dramatically outstripping 2020. It is urgent that people take action,” added Dr. Darling-Hammond.