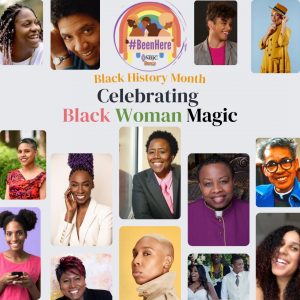 WASHINGTON, DC — In honor of Black History Month, the National Black Justice Coalition (NBJC) is proud to announce its acquisition of the Ubuntu Biography Project.

The Ubuntu Biography Project, created by Stephen A. Maglott, celebrates the legacies and achievements of Black lesbian, gay, bisexual, transgender, queer+, and same gender loving (LGBTQ+/SGL) people. Maglott said the biographies “illuminate the story of our humanity through shared experiences, familiar hopes, our abundant love, our unique passions, our resilience in the face of challenges, and a common desire for community.” NBJC is thrilled to preserve Stephen’s legacy by telling the limitless stories of our vibrant community.

“As long as there have been Black people, there have been Black LGBTQ+ and same gender loving people,” said David J. Johns, executive director of the National Black Justice Coalition (NBJC).  “We show up in incredibly diverse ways and, regardless of whether our sexual identity, gender orientation, and/or gender expression are known and/or centered, we make meaningful and measurable contributions to our families, communities, and our country.

“In spite of this reality, too often people believe the lie that we don’t exist, show up, or show out! Stephen A. Maglott recognized this harmful narrative, and dedicated his ‘soul work’ to the Ubuntu Biography Project. The project was born out of a desire to tell the largely untold stories of LGBTQ+/SGL people of African descent, and to celebrate their remarkable contributions to our world. It is in this spirit that the National Black Justice Coalition humbly accepts the invitation to continue this critically important work.  We are thankful for Stephen’s life and legacy. We understand the importance of being entrusted with the honor of continuing this work,” continued Johns.

Sage Dolan Sandrino, who is featured on the Black History month list and is a member of both NBJC’s Youth and Young Adult Action Council and its Black Trans Advisory Council, said the following,“Visibility and recognition are two vital ingredients in the recipe for a safe and joyful existence. Growing up as an Afro-Cuban queer and trans woman, I always wondered what the ‘gay and trans agendas’ were… now I know they were terms coined by enemies of my existence.

“Our real ‘agenda’ is documentation and representation–proof of our existence — an existence that defies the harmful, grossly false, and racist norms that aim to govern us. Our existence as Black and Latinx LGBTQ+/SGL people is nothing new. We’ve always been here and we have always held space and shown up and shown out,getting into good trouble that benefits all of our siblings,” continued Dolan Sandrino.

“Black LGBTQ+/SGL people have shaped both global history and transformed our local communities, all while leading in nearly every major civil and human rights movement. Black LGBTQ+/SGL people deserve to see ourselves reflected in our cultural history. We deserve to know who has come before us and to be remembered for our contributions to the world. NBJC is honored to continue Stephen’s legacy by continuing the Ubuntu Biography Project.”

The Ubuntu Biography Project can be viewed here. You can also follow @NBJCOnTheMove to see each featured biography throughout the month of February.