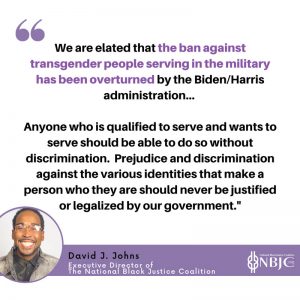 “We are elated that the ban against transgender people serving in the military has been overturned by the Biden/Harris administration,” said  David J. Johns, Executive Director of the National Black Justice Coalition. “Anyone who is qualified to serve and wants to serve should be able to do so without discrimination.  Prejudice and discrimination against the various identities that make a person who they are should never be justified or legalized by our government.

“For Black transgender people, much like the rest of the Black community, the military is often a gateway to an affordable or free education, and often provides a pathway out of poverty. Transgender people deserve to be respected and protected in every avenue of their lives, including their jobs. We applaud this decision to allow transgender people to live openly and freely as themselves, especially while working for one of the largest employers in the United States, and look forward to working with the Biden/Harris administration on furthering protections for our transgender siblings across the board.”