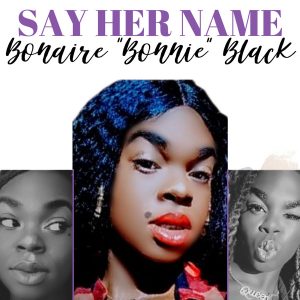 Bonaire “Bonnie” Black was found dead on December 31, 2020 in Atlanta, GA. She was only nineteen years old. While Black’s death is still being investigated by the Fulton County Medical Examiner’s office, the police are saying she died of natural causes. Those who knew Black, however, say that she was killed after an argument.

Bonnie was known as “an artist, songwriter, anime lover, makeup enthusiast and a young girl trying to figure out her purpose in life.” She moved from Savannah to Atlanta at the age of 17 and was in the process of finding a home and employment at the time of her death. According to Black’s mentor, Toni Bryce, the 19-year-old wanted to help people, even when she was having a hard time. Bryce and others from NAESM’s DaCRIBB drop-in center, where Black was a member,  held a memorial and birthday celebration for Bonnie, who would have been 20 years old this month on January 24th.

“Black transgender women and girls like Bonnie experience the highest rates of violent death due to transphobia and misogynoir,” said David J. Johns, executive director at the National Black Justice Coalition. “What feels like acceptable and normalized forms of violence has deep roots in the ways our communities have been dehumanized for centuries. We have to help people love themselves and love one another so they can hold space for every member of our beautifully diverse community. Bonnie should be with us today.”

Bonaire “Bonnie” Black was the 52nd known trans or nonbinary person killed in 2020, leaving us with an average of one violent death each week of the year. This must stop.

To learn more about changing your local laws, look here.

To learn how to increase safety and inclusion, look here.